French Skillet vs Fry Pan: You may be confused when figuring out the difference between a French skillet and a fry pan. You’re probably going to cook a couple of meals, and the recipes require a French skillet for one and a fry pan for another. Now, you don’t know the right cookware for a particular recipe. You’re not the only one who badly encounters this situation, but most people find themselves in this dilemma when deciding on either a French skillet or a frying pan. We have also done a little research on this issue and found some key differences between them.

Both French skillets and fry pans are usually made of stainless steel with an aluminium or copper core at the bottom. But, you’ll find some other types of traditional fry pans that come with cast iron materials and nonstick coatings.

In the case of shape, a French skillet comes with the features of fry pans and saute pans in edges and depth, respectively. But, a frying pan has unique features, including a wide, flat bottom and shallow, flared sides to allow you to flip food easily while frying.

What is the difference between a frying pan and a French skillet?

French Skillet vs Fry Pan - Main Difference
The main difference between French Skillet and Fry Pan is the sides. French Skillets are designed with higher and straight sides. On the other hand, Fry pans feature lower and sloping sides.

Apart from these differences, you’ll find a few subtle changes between the two. In this article, we’re going to talk about those differences and help you choose the right one according to your preference and cooking requirements.

So, let’s get started!

What is a French Skillet? 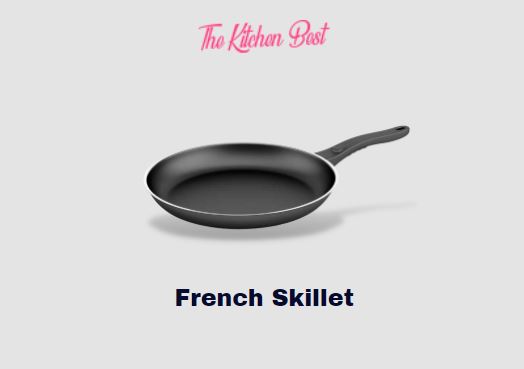 A French skillet is a piece of cookware made of a combination of a fry pan and a saute pan in shape. It features flared sides that slope outward rather than go straight up. As the edges are taller than those of a fry pan, it comes with more depth than that of a fry pan.

What is Fry Pan? 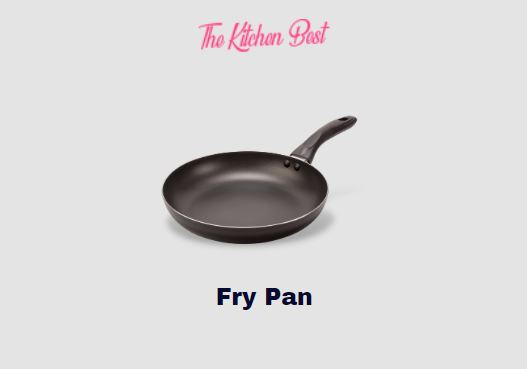 A fry pan is a shallow pan that many people use for day to day cooking. It usually comes with a long handle and is used for frying a wide variety of foods, including meat, pork chops, vegetables, omelettes, fish, and even pancakes.

French Skillet vs Fry Pan: What are the Differences?

In terms of construction material, flat bottom, and the long handle, a French skillet is quite similar to a fry pan. But, you’ll find a few subtle differences between these pieces of cookware, and therefore, you have to know them before purchasing one.

French skillets are designed with all-clad stainless steel with an aluminium or copper core, but they usually don’t come with nonstick coatings. However, fry pans come in various materials, such as stainless steel, aluminium, copper, or a combination of these metals.

Unlike French skillets, fry pans usually come with nonstick coatings. They can also be made of the traditional cast iron today. Thanks to the durable and robust nature of cast iron, you can use these fry pans for heavy use both indoors and outdoors.

When it comes to the shape, a French skillet comes with the features of a frying pan and a sauté pan. While the flared sides of a French skillet resemble a fry pan, the skillet’s depth is almost the same as that of a saute pan.

On the other hand, frying pans usually have a wide, flat bottom with a wide cooking area. They also feature shallow, flared sides to flip food while cooking. Some fry pans have a lip on the edge, which helps you pour sauces or other liquids.

French skillets come in a variety of sizes, mostly from 9 to 11 inches. However, you may find one in between 8 to 12 inches – the same size as a fry pan. On the contrary, the fry pan’s most common size is between 8 and 12 inches (approximately 200 to 300mm).

French skillets are usually designed to cook a variety of meat and vegetables. Thanks to their depth, they’re excellent for sauteing and browning various foods. The high edges keep all the liquids inside the wok and prevent them from splashing out.

In contrast, fry pans are made for frying a wide variety of foods, such as meat, vegetables, fish, eggs, pancakes, and more at high temperatures. The flared sides of the fry pans won’t hold steam so that you can fry foods without getting soggy.

A French skillet usually comes with a dual-riveted long handle made of the same material as the skillet is made of. On the other hand, a fry pan also features only a long handle, but it may sometimes offer an additional helper handle at the opposite of the main one.

French skillets usually don’t include lids, but some manufacturers offer skillets with lids according to the customer’s requirements. Besides, fry pans never come with lids because they’re used for only frying a variety of foods rather than browning or sautéing.

Even though there aren’t many differences between French skillets and fry pans, it’s sure that they’re made for different purposes. Some people consider the differences as subtle things, while others may notice them as a world of difference.

However, the better choice entirely depends on various factors, including material, design, size, shape, and more. Whatever you choose a fry pan or a French skillet, you should opt for one that fulfills your cooking requirements.

We hope you love the article pretty much and know the differences between a fry pan and a French skillet. If you’re still feeling any problems regarding these pieces of cookware, you can share it with us in the comment section below.