How to Clean Rust off Cast Iron Skillet: the easy way to remove rust from cast iron. The cast-iron skillet is one of the durable and versatile kitchen appliances that every household should have. It’s not only a safe pan to cook but also a piece of well-known cookware for its long lifespan if you properly care for it. When it comes to various cooking styles, it performs well and keeps excellent heat retention.

Is Rust on Cast Iron Dangerous? 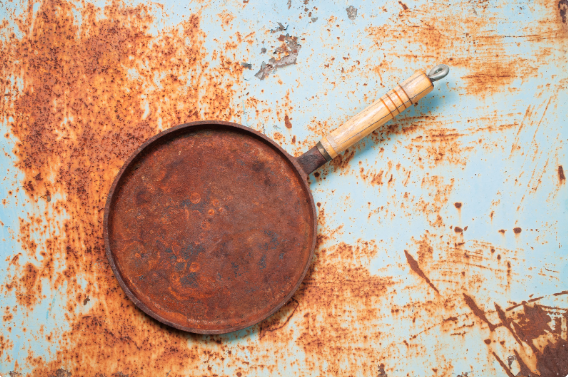 Regarding this matter, you can consider the opinion of a toxicologist named James H. Woods, Ph.D., of the department of environmental and occupational health sciences at the University of Washington. He says, “I am not aware of any studies showing any significant health issues associated with eating food prepared in rusted cookware, but why take the risk?” he says. “I’d buy new cookware.”

Whether in the oven or on the stove, well-seasoned cast iron cookware provides a smooth surface and evenly heats the food. But, if you don’t care for it, it’s more prone to rust. Once you’ve noticed it on your cast-iron skillet, you can remove it using salt or white vinegar. 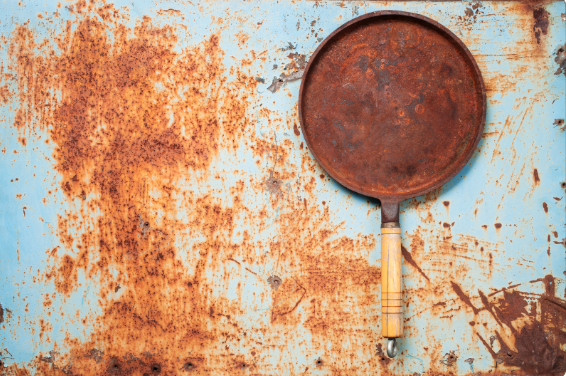 If you want to keep your cast-iron skillet rust-free, here are some tips:

The method of cleaning cast iron skillet is something that has been going from generation to generation. You may find some cast-iron users who don’t allow their cookware near water and dish soap when cleaning it. To make your cookware clean and well-seasoned, follow our step-by-step guide below.

How to Clean Rust off Cast Iron Skillet

You can identify a well-seasoned cast-iron skillet by seeing its shiny black color. It can also add natural flavor to your favorite dishes. As food grease provides flavor, you have to clean any leftover food, like acidic food, to prevent rust. When you’re going to clean a rusty cast iron skillet, you need to follow a method to make it clear easily. Here we’ve given a couple of methods below. Apply any of them to your cookware, which works better.

How to Remove Rust From Cast Iron With Salt 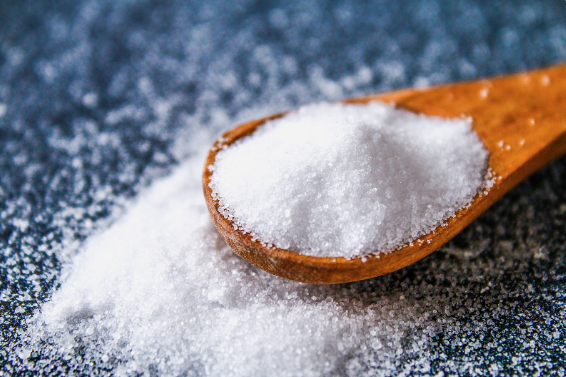 1. Sprinkle Salt On The Surface Of The Cast Iron Skillet

If you use salt for removing rust from your cookware, it will bring great results. Depending on the size of your pan, you have to sprinkle a proper amount of salt on it. For example, to clean a 12-inch cast-iron pan, you need to use about half a cup of salt.

2. Scrub the Pan with a Half Potato

Now, you have to cut a potato in half and rub it on the surface over sprinkled salt. Scrub the pan with the half potato in a circular motion as long as you remove rust. Put some pressure on the potato so that the rust can easily be released. Don’t forget the edges and bottom!

3. Wash and Dry Your Pan

Once you’ve removed the rust, wash it thoroughly to get rid of any remaining potato and salt. Then, use a paper towel to dry your pan and place it on the stove at low heat. This will help to disappear any leftover moisture.

When you remove rust from your cookware, it loses seasoning. To re-season it, apply a small amount of olive or vegetable oil to the pan. Use a clean paper towel to wipe any excess oil. Finally, place the skillet at low heat for half an hour, and this will re-season your cookware.

No, table salt doesn’t cause any harm to cast iron. Even salt works nicely for removing stuck food and residue from the cast iron without damaging the coating. However, Baking soda and vinegar will disrupt your pan and remove the seasoning.

How to Remove Rust From Cast Iron With Vinegar 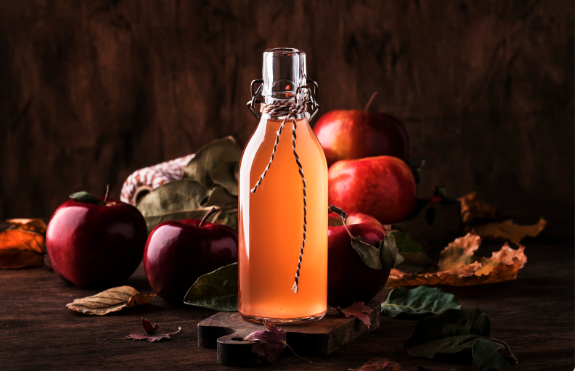 White vinegar can help you remove rust from a much-damaged pan. To do this, you need to mix white vinegar with water in equal portions, depending on the size of your skillet. Use enough mixture of water and white vinegar so that you can fully submerge the skillet into that mixture.

2. Soak the Pan Until the Rust is Removed

You have to make sure that the skillet is entirely submerged in the mixture of white vinegar and water. Then, put the skillet into a bucket or sink as per your convenience and let it soak until the rust is removed.

3. Check the Pan Regularly When It Soaks

How much time you soak the pan relies on what amount of rust your pan has. There is a general rule of thumb that cast iron shouldn’t be submerged for more than 8 hours. You have to check the pan every half hour and bring it out of the mixture immediately after the rust has been removed.

Once you’ve removed the skillet from the mixture, wash it thoroughly. Then, scrub the pan with mild soapy water to get rid of any leftover vinegar. In this case, you should use a gentle scrub sponge or brush because rough sponges can damage your cast iron cookware.

5. Place the Cast Iron in the Oven to Let It Dry

After washing the skillet, dry it with a paper towel or a soft cloth. Next, place the cookware in the oven for about 30 minutes. This will remove any excess moisture and make it completely dry.

If you want to re-season the pan, rub the interior and exterior surfaces of the pan with vegetable oil and place it in the oven at 350-degree F for 45 minutes to 60 minutes. 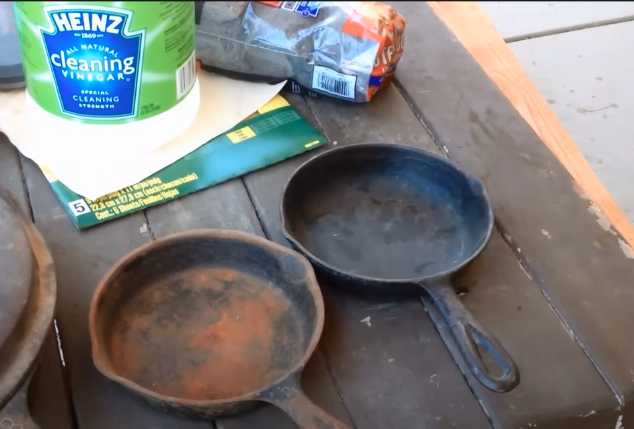 Yes, it is easy for vinegar to destroy the fragile cast iron pan structure in its raw state. So, it’s not advised to clean cast iron with vinegar.

How Long Does It Take for Vinegar to Remove Rust?

If you deal with massive rust, it is necessary to soak the metal object for a longer period. Usually, it is better to soak a metal in the vinegar for about 30 minutes to remove rust.

Can You Burn Rust Off Cast Iron?

No, you can’t burn rust. Hence rust is an oxidized metal, which remains the same even under extreme temperatures. So, whether you found rust on your cast iron grill or pan, you can’t remove rust by using extreme heat.

Last but not least, there is an essential rule that you have to follow if you want your skillet to last for years. Thoroughly dry the cookware before storing it because the slightest bit of moisture can cause rust on it. To absorb any humidity or moisture, always place a paper towel or a soft cloth into the pan.