When it comes to cooking caramelized rib-eye steaks, perfectly tempered silky omelets, or fluffy pancakes, a heavy-duty frying pan can be a substantial investment. Surprisingly, you can make these dishes in a heavy-gauge skillet. So, a question might be lingering into your mind – which one will be the right option for me? If you want to decide on either a skillet or a frying pan, you must know the differences between the two. If you prefer one, make sure that it must fulfill your cooking requirements.

What Is the Difference Between a Skillet and a Frying Pan? 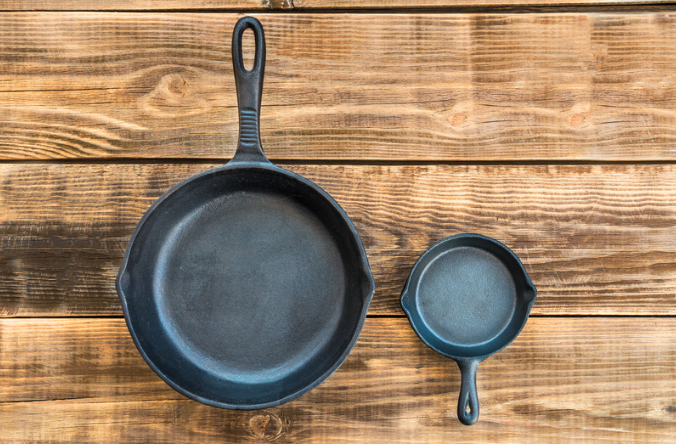 Since both skillets and frying pans come with many similarities, finding the differences between them is a daunting task. We’ve done some research on these pieces of cookware and found a few key differences to help you out.

Skillets are slightly deeper (at least 2 inches) and a bit thicker than frying pans. A frying pan is mostly used for frying, browning, and searing food, whereas skillets are used for braising curries and thick sauces.

Besides that, skillets are usually made of cast iron, although they’re built with different metals. Frying pans, on the other hand, are mostly manufactured with aluminum, stainless steel, or a combination of stainless steel and aluminum.

Despite these visible differences, many people confuse between skillets and frying pans. If you encounter the same problem, you won’t need to worry because we’re now going to talk about these cookware pieces below. So, hook up with us!

Before getting into the differences between skillets and frying pans elaborately, you can quickly look at the summary of those differences. Skillet vs Frying Pan – What are the Main Differences?

Now that you know there are some visible differences between a frying pan and a skillet, you’re supposed to make the right purchase. But, we have to dive into the differences properly to reduce the chances of buying a flop.

Skillets are usually made of heavy-duty cast iron, although they can be built with carbon steel or stainless steel. On the contrary, frying pans are manufactured with aluminum, stainless steel, or a combination of these heavy-gauge metals.

As skillets are made from cast iron, they don’t need to come with a synthetic nonstick coating. Eventually, they have a natural nonstick coating that protects your food from the artificial coating’s harmful contamination.

However, frying pans are often incorporated with a nonstick coating. The coating may get mixed with your food and cause many harmful diseases. But, the benefit is that you need significantly less oil to make a healthier dish.

A frying pan can heat up a bit quicker than a skillet due to the shallower and thinner body. But, when it comes to retaining heat, a skillet has more heat retention capability than a frying pan because of the cast iron construction.

In the case of depth, skillets are a bit deeper (at least 2 inches) than frying pans, whether they’re nonstick or not. If you’re looking for a piece of cookware that allows you to do deep-frying, a skillet is the better option.

While a skillet is usually used for braising curries and thick sauces, a frying pan is mostly preferred for frying, browning, and searing food. Besides, you can do high-heat grilling and deep-frying in both pieces of cookware.

Eventually, you can use skillets and frying pans interchangeably for searing, frying, braising, and browning a wide variety of dishes. In other words, if you ask us a question, “can I use a frying pan instead of a skillet,” the answer to the query will be yes.

Whether a frying pan or a skillet comes with a lid or not is entirely depends on the manufacturer. However, most skillets in the market come with a lid, while frying pans usually don’t include a lid in the packages.

When it comes to oven safety, cast iron skillets are oven-safe at almost any temperature. On the other hand, frying pans don’t usually feature oven safety due to their thinner constructions and artificial nonstick coatings.

Skillet or Frying Pan – Which One You Should Buy

We want to reply to the query that this entirely depends on your cooking style and recipes. Both skillets and frying pans are must-have items in the kitchen because they have unique uses and specialty in particular recipes.

If you need a piece of cookware for regular home use, a frying pan is better. But, if you want to make amazing dishes for a specific occasion, you should get a skillet. However, you should get both whether any of them will be needed.

In a nutshell, some people use these terms, skillets and frying pans, interchangeably. In contrast, others believe that they’re quite different in terms of construction material, depth, weight, nonstick coating, lid, oven safety, and more.

However, the fact is that you can find many differences between a skillet and a frying pan. Although you’ve already known all about skillets and frying pans, you should have both of them in your kitchen to make plenty of stunning dishes.

If you want to know which one we recommend you choose between these two, we can only say that it depends on your personal choice and the recipe you’re going to prepare. For braising meat, a skillet will provide you with better performance.